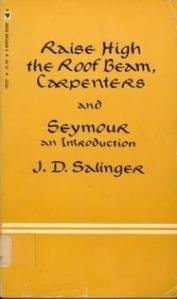 I was on vacation when I heard the news. We were driving to the beach and the NPR station was in the middle of a piece about good old JD when I turned it on. Somebody was blathering on about how Franny and Zooey was the best of his works. That always riles me.

Me – “I wonder why they are talking about Salinger…” I’m sure my tone was edged with something like irritation.

I knew that he was 91 and cantankerous to beat the band. I knew he was the guy that inspired crazies, endless speculation and the literary lust in many. Yet I cried. I’m not ashamed to admit it. Despite enduring many a dismissive glare when I would announce how much I loved Raise High the Roofbeams, Carpenters and Seymour an Introduction I still love it.

Chris Wilson has a great article in Slate about why Seymour an Introduction was Salinger’s best work.

Most of the articles I’ve read in the last week, since returning from vacation, have focused on Salinger as the voice of adolescence. Many have commented that they grew out of J.D. Salinger. I picked up my well worn copy of his last book and realize that these people have never read it. Because it isn’t the kind of work you grow out of. You read it again and again and marvel at the layers, at the complexity of character and most of all how someone so personally damaged could write something so beautiful and true.

Here is my favorite line:

“If only you’d remember before ever you sit down to write that you’ve been a reader long before you were ever a writer. You simply fix that fact in your mind, then sit very still and ask yourself, as a reader, what piece of writing in all the world Buddy Glass would most want to read if he had his heart’s choice. The next step is terrible, but so simple I can hardly believe it as I write it. You just sit down shamelessly and write the thing yourself.”