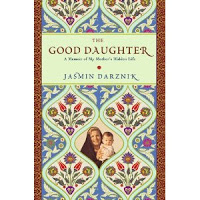 I just finished reading The Good Daughter by Jasmin Darznik and highly recommend it. I had pre-ordered this title in the fall, promptly forgot all about it, and was pleasantly surprised when it showed up on my snowy doorstep two weeks ago. (That is why I love pre-ordering things, it feels like a present I’m scheduling for myself sometime in the future.)

So, I immediately started reading this debut memoir, and despite my harried life at the moment (revising Riding the Blind, caring for my new five week old daughter and three year old son) I just couldn’t put it down. At night when my daughter was done nursing and had slipped into sleep and I should have gone back to bed I would keep reading. There I was, with the lamp still on, telling myself “just a few more pages.” The Good Daughter is that kind of work.

I met Jasmin at the Squaw Valley Community of Writers in August 2010. I was very impressed with her work and the insightful and intelligent comments she offered to other participants during our workshops. I am grateful to have spent time with her. Without Jasmin I would never have actually seen Lake Tahoe. I am very thankful that she invited me on that little adventure during our free afternoon. I probably would have done something lame like taken a nap had she not.

The Good Daughter is a memoir about three generations of woman and follows the narrator’s discovery of her mother’s secret early life in Iran. This secret life included a marriage and another daughter. One of the things I most admired about the work was the honesty and focus brought to the narrative. The personal stories that unfold illuminate many larger themes, in a way that both informs and engages the reader, without being heavy-handed or sentimental. I loved the descriptive language and how every detail and nuance works to build the framework of this rich story.

Congratulations to Jasmin on this remarkable debut!